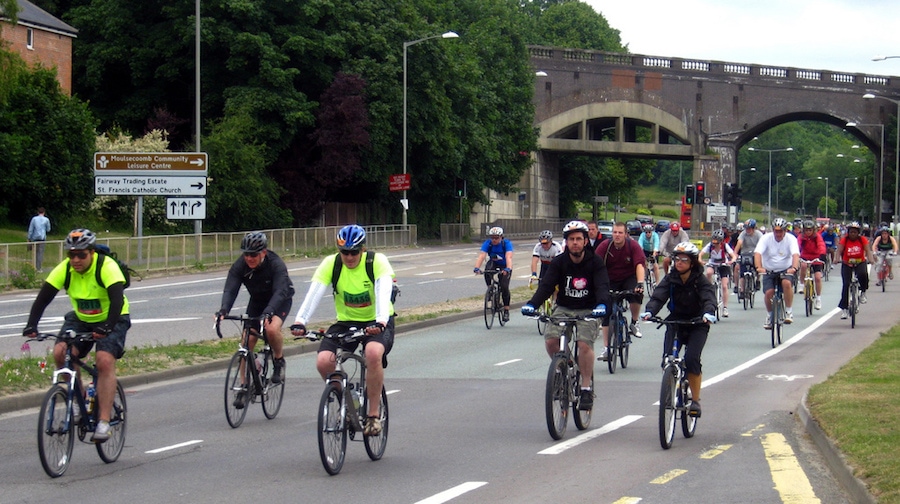 In the last entry I wrote about the London cycling scene and how the government is trying to encourage bicyclists.  It’s been successful, as riding has increased an estimated 15-20%, according to the Times of London.

However the fatality rate has also increased, by an actual 10% for the most recent year where data are available.  The reason for the increase in deaths is readily apparent.  They have hyped cycling to the population while doing nothing to the infrastructure to support it.  The fatality rate for cyclists in the UK is roughly four times higher per mile ridden than in the Netherlands.  The Netherlands is perhaps the most bike friendly place on Earth; streets are laid out for the benefit of cyclists not drivers.

London, on the other hand reminds me of where I live, in Greensboro, NC.  Here we simply designate bike lanes but don’t widen the streets to accommodate them.

My favorite is a street called Westridge; you go one block on Westridge and suddenly a bike lane is marked on one side of the road.  It goes on for a couple of miles and them it simply stops – no more bike lane.  I guess at that point you simply junk your bike and hitch hike home.

London is much the same, bike lanes are simply painted without any modification to provide for cyclists.  However, London does have well marked bus lanes, a lot of cyclists use them; see the attached photo, the bus lane is the red brick lane on the left.  At stop lights a lot of London cyclists will pull up in front of cars waiting for the light to change; they feel safer than if they are beside the cars because they can be seen better by a turning driver.  As you may imagine, this creates a lot of driver hostility; it would sure buzz me.

Additionally, if there are helmet laws in London they are not enforced; many, many cyclists are bareheaded.  And as we all know, head injuries are the major cause of cyclist deaths.

So London has the spirit but not the will to really make it safe for people to ride.  It’s too bad, because it is essentially a flat city and if biking was safer it would be accessible to a lot of people.  I’m always amazed to see so many cyclists in San Francisco with those stupendous hills.  Cyclists are crazy, both at home and abroad!  Ride safely