A History of the Cycling Jersey 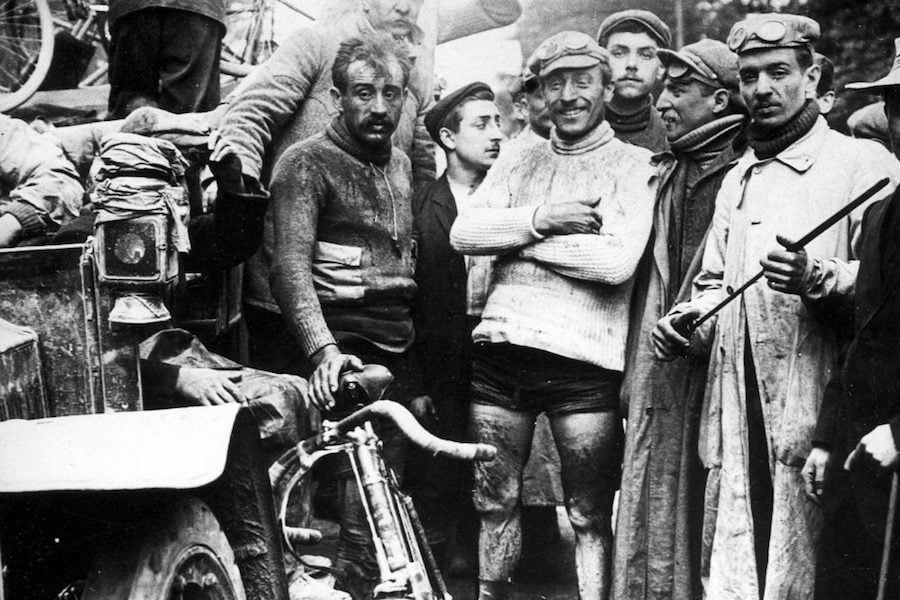 The cycling jersey has gone through many transformations. What was originally extremely heavy and bulky, has over the years evolved into something much more lightweight, functional and colorful.

The need for a cycling jersey actually came about in the 1800s. As cycling grew in popularity, so did the demand for cycling clothing that could accommodate those who began to engage in cycling as a sport. Cyclists who raced needed a certain type of clothing that would be more advantageous to racing conditions.

Here’s a look at how cycling jerseys have evolved over the years.

The Cycling Jersey in the Early 1900s: Wool and Silk 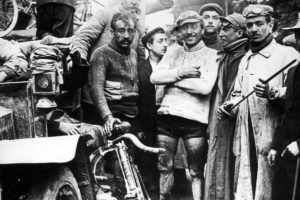 In the early 1900s, practically all cycling jerseys were made out of wool. Long-sleeved and extremely heavy, wearing a cycling jersey was not always the most comfortable experience. Wool, however, did offer some advantages for cyclists. It was capable of wicking away moisture far better than cotton, and it had a tendency to absorb perspiration quite well.

This made wearing a wool cycling jersey ideal for the winter and summer months. But once the cycling jersey got wet, it became extremely heavy and uncomfortable to wear. Wool also wasn’t that great at allowing air to pass through its fibers, but it was the standard for many years, so cyclists had to grin and bear it.

Most wool jerseys were plain, with almost no real design element. Some had a team name or a slight colored stripe to signify the riders from one another, but otherwise, many of the first cycling jerseys were quite bland. As time went on, some designers became more inventive and used patchwork designs with swatches of different colors, or even stripes, to give a modernistic or avant-garde appearance, creating more colorful cycling jerseys.

Colored jerseys also came to represent different racing positions, such as the leader of the team wearing a yellow jersey. 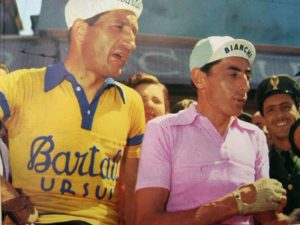 In the early 1940s, Italian tailor Armando Castelli developed a version of the cycling jersey made out of silk, as a lighter alternative to wool. Castelli had developed a reputation designing cycling clothes for Gino Bartali. But it was actually Bartali’s rival, Fausto Coppi, who approached Castelli about something lightweight, that would make him race faster.

Once the news of this new type of silk cycling jersey got out, cyclists embraced it for the faster ride – perfect for racing; the lighter fabric also gave way to additions, such as collars, pockets and zippers, without weighing the fabric down.

Silk was also much better at absorbing different dyes, which allowed for more colorful jerseys and it also gave businesses the ability to print their logos or related advertising on the cycling jersey, which increased the business’s visibility. 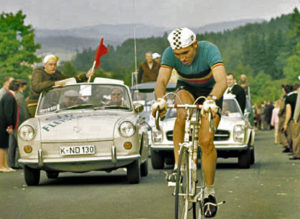 It wasn’t until World War II that fabrics for cycling clothing began to change, with the development of polyester, spandex and nylon. These three fabrics not only enhanced the development of the cycling jersey, but other sports apparel as well.

In the late 1950s, DuPont laboratories developed lycra by combining elastic with polyester. Lycra was a huge step forward for cycling apparel and other athletic clothing, offering greater elasticity and durability compared to other fabrics at the time. Lycra has since been used not only for cycling jerseys, but all types of fabrics, including ski pants, stockings, wetsuits, socks and much more.

For cyclists, lycra presented an aerodynamic fabric that was lightweight and allowed for moisture wicking, as well as offering a much wider range of color schemes for cycling jerseys, involving everything from polka dots, stripes and a variety of other designs and colors, to help make them stand out and get noticed. Some designs were quite interesting in terms of their use of colors, while others were simply ugly with odd colors as well as overkill with abundant product placement. Imagine all the patches on a Nascar suit on a cycling jersey? There you go.

Fluorescent clothing has had a somewhat accidental history. In the 1930s, a young Bob Switzer took a serious tumble and suffered a severe skull fracture, which damaged his optic nerves; he recovered in a darkened room, which helped him regain his eyesight over a period of several months.

While recuperating, Switzer kept a small collection of fluorescent minerals in his room as a form of optical stimulation. After his vision was restored, Bob and his brother Joe fiddled around with fluorescent colors in order to develop dyes and paints that would glow in the dark, while reflecting brightly in the daytime. 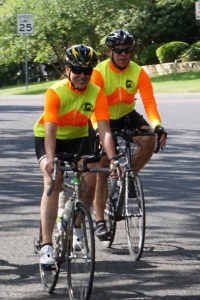 They eventually discovered that a blacklight would promote fluorescent compounds. The Switzer brothers founded what would eventually become the Day-Glo Color Corporation in 1946, which allowed them to manufacture fluorescent paints (called daylight fluorescent pigments), as well as a variety of dyes and other products that have been used to generate fluorescent colors ever since.

Fluorescent clothing eventually took hold with cyclists as a way for them to be seen by oncoming traffic. Regardless of the dyes, fluorescent clothes still retain their lightweight versatility and are commonly seen on roads around the world.

Incidentally, fluorescent pigments also played a role during World War II. American warplanes carried inflatable rafts originally in a nondescript shade of khaki, which was very hard to spot, especially in the vast Pacific Ocean. The US Army conducted tests to determine the most visible color from a distance of thousands of feet high. The winner was an exceptionally bright orange color, which was labeled ‘International Orange’. Converting these life rafts to this particular color would save the lives of many US airmen. See Me Wear uses fluorescent International Orange in every garment, for unrivaled visibility.

While fluorescent clothing has made great strides in helping road crews, police and railway staff be seen, it’s also been valuable to cyclists as more people bike and find themselves competing with more cars on the road.

Distracted drivers are of ongoing concern to more and more cyclists, and improving bicycle safety is something all cyclists should concern themselves with. Though it’s not only as simple as what you wear, sometimes what you wear can make a visible difference. We invite you to read about some of the benefits of high visibility cycling.

There’s no question that cycling jerseys have drastically changed over the years, especially with the switch from heavy fabrics, such as wool, to lighter fabrics, such as lycra and polyester. And cycling jerseys themselves have provided a rich insight into the sport over the years; so much so that Cycling magazine actually put together a history of cycling told in 15 jerseys.

Recent years have also seen a resurgence in wool cycling jerseys, with cyclists opting to wear Merino wool jerseys, particularly in the cooler winter months. There also seems to be a resurgence in simpler designs, compared to the loud and busy designs of years past.

As with all products, new trends are beginning to surface as well, some perhaps a little more helpful than others. Recent cycling jerseys now utilize UPF clothing to help cyclists protect themselves from sunburns. Others recent trends include cycling jerseys made from bamboo and bio ceramic fabrics. Sometimes, however, we all just prefer a regular ol’ cycling jersey.

You can read more about the benefits of bicycle jerseys here. 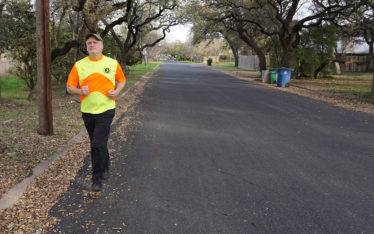 Just How Important is Fluorescent Running Clothing?
Why the Best Running Clothes Help You to Be Seen When creating running clothes, most athletic clothing companies put the focus on comfort, style, and the latest fashion trends. This...
149 Likes 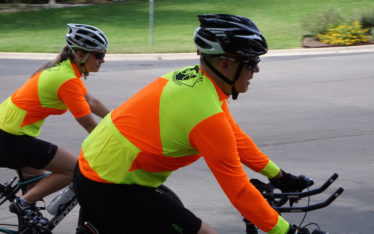 Your Eyes: Bright Light, Darkness and Fluorescent Clothing
You may ask yourself: how does fluorescent clothing actually work? Well, one part of it has to do with your eyes and how we perceive different colors and shades at...
142 Likes 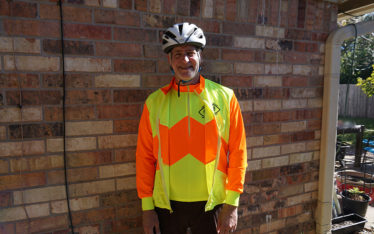 Are You Geared Up for Winter? A Guide to Winter Cycling Clothing and Gear
Winter & Cold Weather Cycling Guide Winter’s just around the corner, and as the weather starts to cool, it’s a good time to make sure that you’re prepared and that...
127 Likes