Texting to Someone Who is Driving May Cost You 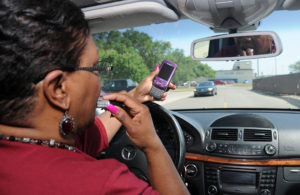 Here’s one example of why texting while driving is a threat to bike safety. In an incident in New Jersey in 2009 a teenage boy hit and very seriously injured a couple riding on a motorcycle. The boy, texting messages to his girlfriend while driving (not a smart idea), drifted across the center line and hit the motorcycle head on.

The motorcycle victims sued not only the driver, but also his girlfriend for helping to cause the accident by distracting his driving by texting him.

So while it’s not illegal to text to someone you know is driving, we predict that it soon will be. Many states are cracking down hard on distracted driving; there’s just too much at risk not only for bicyclists, but also for drivers and pedestrians. A New Jersey law, based on this case, makes distracted driving a criminal offense if the driver causes an accident with fines for bodily injury as high as $150,000 and up to 10 years in jail.

As cyclists, we can only support and applaud anything that makes it safer to ride on public roads. We can be as safe as possible by wearing high vis fluorescent clothes, using hand signals, wearing helmets, cycling jerseys and practicing the basic rules of bike safety. Putting drivers in jail for distracted driving accidents sounds like a terrific idea to stop distracted driving. Let’s put some teeth in the law so it becomes a deterrent.